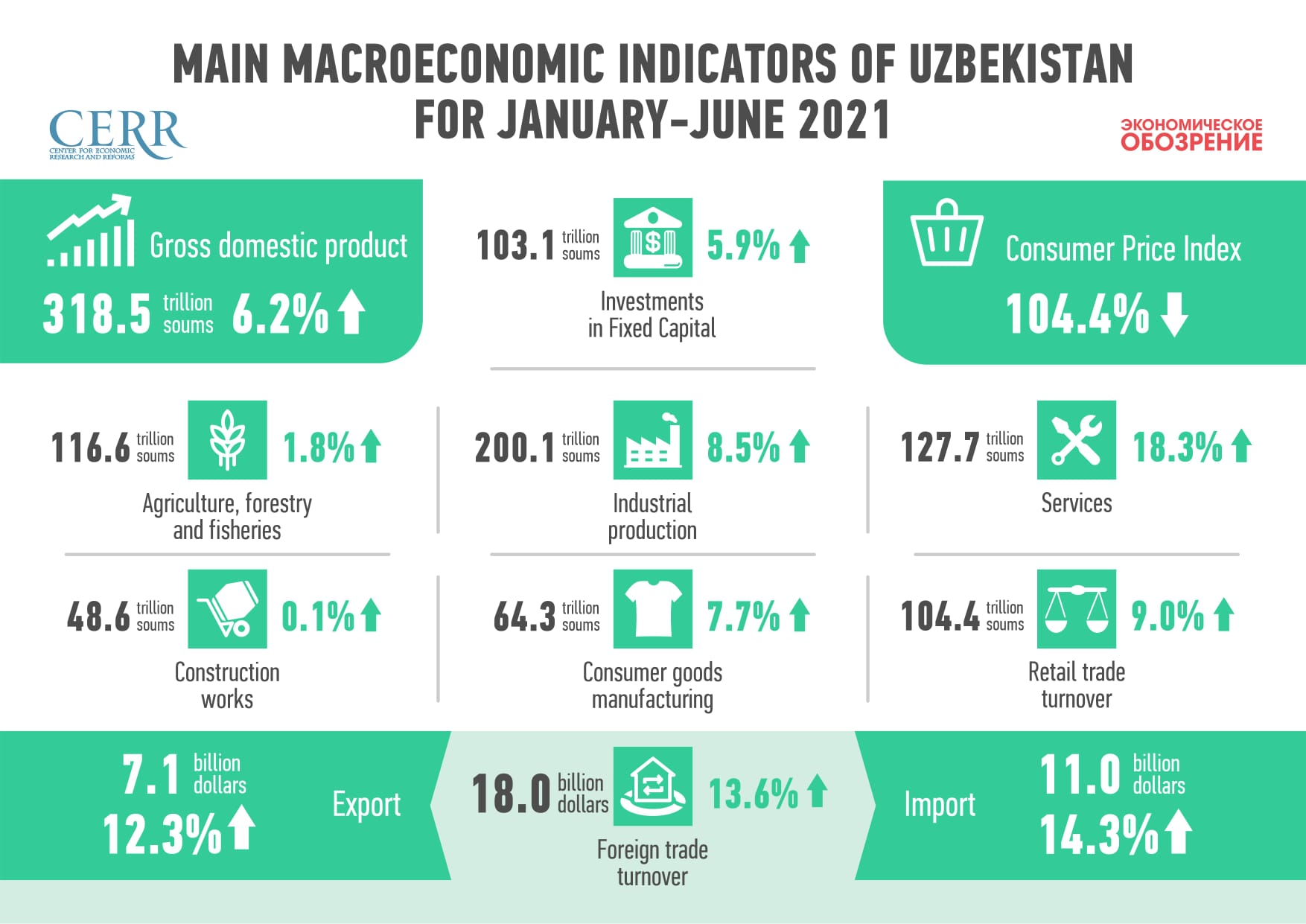 Despite the ongoing pandemic in the world, the economy of Uzbekistan has reached record growth rates.

According to the State Statistics Committee of the Republic of Uzbekistan, the gross domestic product for the first six months of this year increased by 6.2%. For comparison: over the same period last year, due to the pandemic and lockdowns, the economy grew by only 1.1%, and in the first three months of 2021 - 3%.

At the same time, it should be noted that Uzbekistan’s main trade partners’ economy is stabilizing at the end of the six months and returning to the growth trajectory. Thus, Kazakhstan's GDP increased by 2.2%, against the decline for the same period last year by 1.8%. The Kyrgyz economy is gradually decreasing, in January-June, the rate of decline slowed to 1.7% against 5.6% in the first half of 2020. China maintains dynamic growth this year, where a 12.7% increase in GDP is recorded in the first half year. In Russia, GDP grew by 3.7% during January-May.

In Uzbekistan, inflation in the consumer sector continues to slow, despite serious price hikes for certain commodities such as carrots and vegetable oil. According to the results of six months, prices increased by 4.4% while in 2020 over the same period - by 4.6%. By May 2021, prices decreased by 0.2% due to seasonality. The largest increase in prices is noted for food products - by 5.7% (in the first half of 2020 - 6.2%). The rise in prices for non-food products is also slowing down - 3% against 3.6% in January-June 2020. 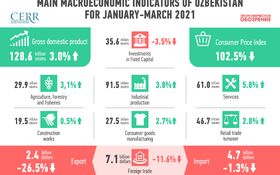 The trajectory of the first quarter of the Uzbek economy

The positive dynamics of production is noted in all sectors of the economy. The main drivers are industry and the service sector.

The industrial sector in January-June demonstrates high growth rates - 8.5% against a decline of 0.3% over the same period last year. The mining industry grew by 7.5% (a decline of 18% in January-June 2020), the manufacturing industry - by 8.6% (4.9%), electricity, gas and air conditioning - by 12.1% (8.4%). The production of consumer goods increased by 7.7% against the growth of 1.2% in the same period last year, with the outstripping dynamics in the production of food products.

The service sector, such as tourism, catering and accommodation, demonstrates impressive dynamics - an increase of 18.3% in the first half of the year versus an increase of 2.6% in January-June 2020. The transport sector is actively recovering after last year's decline: freight turnover increased by 14.1%, passenger turnover by 4.1%. Retail trade in the period under review increased by 9%.

A slowdown in relative to last year is noted in agriculture to 1.8% versus 2.8%, which is due to difficult weather conditions this year and lack of water. The growth rates of the construction sector also slowed down to 0.1% against 7.1% in the first half of 2020.

Foreign trade also managed to overcome the recession. In the first half of this year, sales grew 13.6% to $18 billion. In the same period last year, there was a significant decline of 18%. During the period under review, exports grew by 12% to $7.1 billion and imports by 14.4% to $11 billion. In the second quarter, Uzbekistan sold gold abroad against the background of positive price conditions on the world market. However, it should be noted that in the first six months the volume of exports without gold increased by 36.4% and reached 5.7 billion dollars.

In the structure of exports, the volume of food supplies to foreign countries increased by 6.3%, chemicals by 18.6%, industrial products by 74.4% (mainly textiles, non-ferrous metals), machinery and transport equipment doubled.

Thus, according to the results of the half-year, the economy of Uzbekistan is actively overcoming the consequences of the crisis and reaching the dynamics ahead of the pre-crisis indicators.

Center for Economic Research and Reform